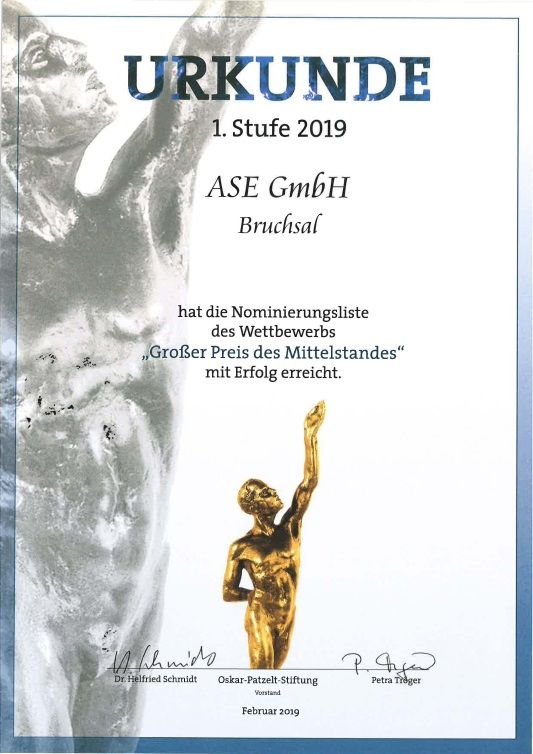 The Oskar Patzelt Foundation's Grand Prize for Medium-Sized Enterprises is Germany's most prestigious economic award." ( DIE WELT ). The competition is already being announced for the 25th time in 2019. Only every thousandth company in Germany reaches the nomination list. ASE GmbH is one of them.

A great success for the medium-sized company based in Bruchsal. The nomination for this competition, to which one cannot apply oneself, counts to as an admission ticket to the "Network of the Best". This is because as the only business award in Germany the Grand Prize of Small and Medium-Sized Enterprises does not only consider figures, innovations or jobs, but the company as a whole and in its complex role in the Society.

The Grand Prize of Medium-Sized Enterprises is a flagship for the prestigious 'Made in Germany' brand said Albrecht Gerber, Economics and Energy Minister Brandenburg. And Barbara Stamm, President of the Bavarian Parliament, praised: "Who was nominated here has already received a 1st Quality Award from this selection alone."

The nomination is a great compliment for us. ASE now has time until April 2019 to compile significant documents and submit them. An independent jury will then select the winners and finalists. The award ceremonies will take place in September, followed by the Federal Gala in October.